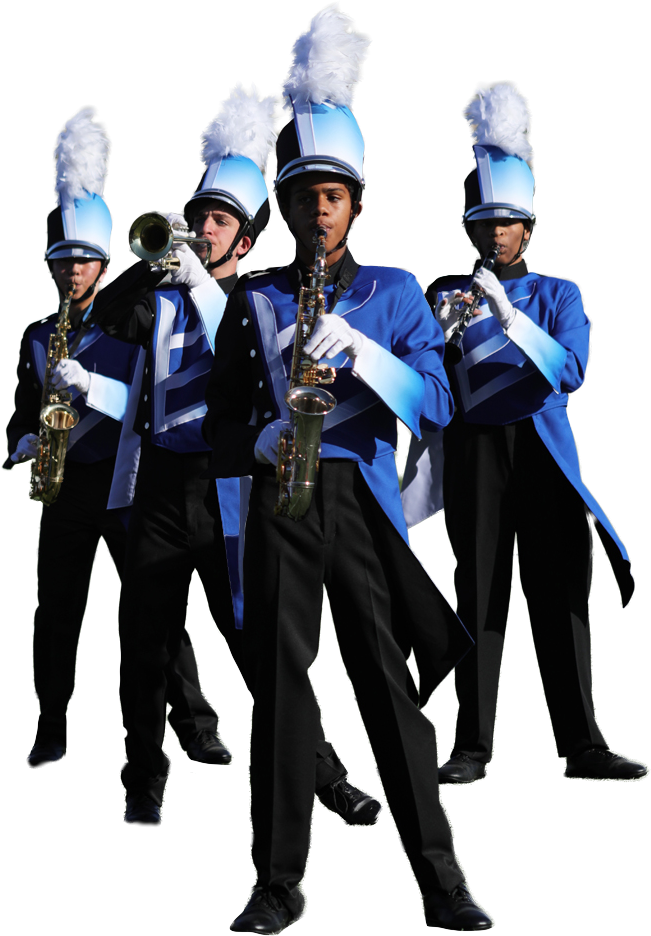 East High has an outstanding tradition of excellence in vocal and instrumental music. Great music, great concerts, and great friendships combine for great classes. Music is a skill our students use and will enjoy the rest of their lives.

Our ensembles have performed for the state, district, and national conventions and clinics. The Marching Band has performed in London, England; San Francisco, California; marched at Walt Disney World in Florida and most recently performed in Nashville, Tennesee. The Blue Note Jazz Band has traveled to Indianapolis, Atlanta, Orlando, Chicago, Los Angeles, Kansas City, and New York City.

There are many opportunities to volunteer throughout the school year and we depend on our parents and supporters to make our events and performances a success. Please watch your email and social media for requests.

If you would like to support the instrumental music program at East monetarily, we make it easy with support for Venmo.

Interested in what a typical fall semester of marching band looks like? Take a look at our Band Handbook.

Under the direction of Mr. Thorpe, the East Wind Ensemble has been selected to perform at the Nebraska State Bandmasters Association State Convention twice, in 2012 and 2016. From 2013-2016, Mr. Thorpe served as Chair of Band Activities for the Nebraska Music Educators Association. The Marching Band has grown to be one of the largest in the state, with 250+ members.

His wife Amy teaches vocal music at Lincoln Northeast High School and they have two boys, Tommy and Myles.

Mr. Rodas Calderon received their Bachelor’s in Music Education from the University of Nebraska - Lincoln in August 2022 with an emphasis in Euphonium. In his first year, he teaches at East HS, McPhee, Prescott, Everett, and Saratoga Elementary schools.

At East, Mr.Rodas Calderon teaches Wind Ensemble, while assisting with marching band. In addition, he also teaches 5th grade band at a handful of schools in downtown Lincoln. Providing beginning band lessons in both English and Spanish, he is passionate about teaching in Title I schools, providing equitable outcomes for all students.

Steffani Nolda is currently a senior pursuing a Bachelors of Music Education degree at the University of Nebraska-Lincoln where she studies saxophone under Dr. Paul Haar. She is a 2019 graduate of North Platte High School in North Platte, Nebraska. During her studies at UNL, she has been a member of the Symphonic Band, Wind Ensemble, and Saxophone Choir. She is a 4-year member of the Cornhusker Marching Band and is honored to have served as a drum major for the most recent season. She has been a camp counselor for the UNL Winter Winds Festival, Middle School Band Camp, and the High School Marching Camp. She has additional teaching experiences including private lessons with middle and high school students and is currently student teaching at Lincoln East High School. When finished with her degree, she seeks to pursue a career as a high school band teacher.

Co-Curricular ensembles meet during the school day and students are enrolled through Lincoln East to participate. Students receive a grade in these ensembles and therefore must adhere to the grading requirements set forth by each class. Classes offered are listed in the Ensembles.

This is the first quarter portion of Band at East for all grades. Students will be expected to attend a camp in the summer. Students who do not attend this camp cannot be guaranteed a spot in the halftime show! This ensemble performs at all home football games and 4 marching festivals. All students will develop not only physical stamina but memorization and multi-tasking skills.

This ensemble begins playing in the second quarter after marching season is completed. It, along with Blue Note, is the top instrumental ensemble at East High School. It is based on an audition played the previous spring. This ensemble will perform 4-5 concerts per year as well as perform at the District Large Ensemble Contest for adjudication in April. A select group from Wind Ensemble will play with the Varsity Orchestra for their Cadenza Concert.

This ensemble also begins in the second quarter and is open to all 10-12 graders. This group will perform 3-4 concerts per year and may perform at the District Large Ensemble Contest.

This ensemble begins in the second semester and is made up of the East Band’s 9th graders. This is a great opportunity to develop a musical “team” and sense of camaraderie between members. The main focus of the band is to develop solid fundamentals of playing in a concert ensemble and to best prepare students for their future ensembles. The 9th Grade Band will perform 2-3 concerts per year and may perform at the District Large Ensemble Contest.

This is a year-long ensemble. Membership in this ensemble is decided by audition the preceding spring. This ensemble will focus on learning the various elements of jazz through demonstrations, handouts, projects, lab work, and most importantly, performance. Performances include concerts, jazz festivals, and possible civic performances as they arise.

This class meets 2nd semester and consists of all percussionists in grades 9-12. They perform their own spring concert and also learn music to perform with the concert bands.

Extra-Curricular ensembles are not actual classes and typically meet outside of the school day, both before and after school, and in no way are required to be in band at East. They are meant to be extra opportunities that are open to East Band students.

These Jazz Bands meet in the spring semester and are meant to be an introductory environment for those interested in playing in a jazz band setting. Typically meeting one to three times per week before school, this ensemble is meant to build a strong foundation of basic improvisational techniques that are needed to be selected into the Blue Note Jazz Band. The band’s performances could depend on the instrumentation and maturity level from year to year. There is no audition for this band, only a willingness to learn and consistent attendance.

This pep band performs at all home basketball games in December, January, and February. All are welcome to participate but need to attend specified rehearsals in November to be involved. Students must be in band both semesters to be eligible for pep band.

Musical Pit Orchestra rehearses and performs for the school musical in the Fall Semester. Members are selected through an audition in the fall and include band and orchestral players. This group typically rehearses two evenings a week, in addition to extra rehearsals the two weeks prior to the show, and performs in three shows. Consistent attendance and individual practice is required for this group.

The purpose of Show Choir Band is to play for Show Choir performances. This group auditions during the fall semester, begins rehearsals during second quarter, and continues through the end of Show Choir season in March. In addition to rehearsing 1-2 times weekly, they also perform in six competitions and two home shows. Show Choir Band is led by the Choir Director.

Various other ensembles may be formed throughout the year, depending on the level of student interest. These might include percussion ensembles, miscellaneous duets, trios, quartets, etc. that might want to perform at the Solo & Ensemble Contest and the Tri-M Souper Bowl in February. These are not required but are strongly encouraged and are an excellent way to develop musicianship in a chamber music setting. Students usually start selecting music in November and prepare their music in the coming months.

Much like performing in the Small Ensembles, this opportunity will raise your musical ability to a whole new level. Soloists also perform at Solo-Ensemble Contest and Tri-M Souper Bowl in February.